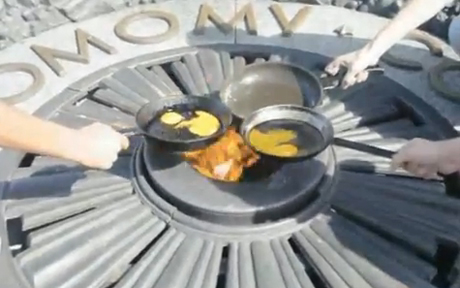 Legal Human Academy, together with Greenpeace International, the Human Rights Centre of the University of Gent, and the Open Society Justice Initiative, has been supporting a request to refer the case of Sinkova v. Ukraine to the Grand Chamber of the European Court of Human Rights. The request has been endorsed by a joint letter of support by 22 organizations involved in the study, protection, or exercise of the rights to freedom of expression and freedom of peaceful assembly.  The case involves a member of an artistic group, Anna Olegovna Sinkova, who fried eggs over the eternal flame at the Tomb of the Unknown Soldier in Kyiv. The performance was filmed and posted online as an act of peaceful protest against an aspect of the government’s policy. Sinkova was arrested for desecrating the tomb, held for three months in pre-trial detention, and sentenced to three years in prison, suspended for two years. In its judgment of 27 February 2018, the European Court of Human Rights held, by four votes to three, that there had been no violation of Article 10 of the European Convention on Human Rights, which protects freedom of expression and the right to protest (see also our blog on Strasbourg Observers).  On 2 July 2018 the panel of the Grand Chamber has rejected the request for referral of the case to the Grand Chamber. On 25 February 2019 the judgment in the case of Sinkova v. Ukraine won the Strasbourg Observers’ ‘prize’ for the worst judgment of the ECtHR in 2018 (see also our blog on Strasbourg Observers in the case of Matasaru v. the Republic of Moldova). In more recent case law about non-violent ‘symbolic speech’ the ECtHR seems to have altered its approach, and at several occassions it now found violations of the right to freedom of expression (see here).